A Tale of Georgette The Plant And The Lesson I Learned

Hello Family..This is a story about our plant I named Georgette.She has been a part of our family for years. When she was purchased she had about 4 stalks with leaves growing off of them. She would sit on the plant stand and watch the daily activity. At Christmas time I even decorated her with little red ribbons. She was growing quite large actually outgrowing the pot she was in so Hubby thought it was time to put her in a bigger pot.
Georgette didn’t like her bigger pot in fact she rebelled and little by little her leaves started falling off. I tried giving her plant food and made sure she wasn’t over watered or in the cold or direct sunlight too long but to no avail she didn’t bounce back. All of her leaves fell off leaving nothing but a stalk and even that withered up. I  didn’t want to just throw her away so she was put outside next to the porch along with a few extra flower pots we had.
Seeds floating in the air caused weeds to fill the area of dirt where she once stood tall and proud. About 2 years have now gone by. The other day Hubby was outside filling the birdfeeder and he came in and said you will never believe it Georgette is back! Now it is funny to see him get excited about this plant..lol..Here she was actually growing sideways out of the pot she wanted out! 2 years later! It really made me think….
I thought Georgette was done. But there was still a glimmer of hope that’s why I didn’t want to just throw her away. And here 2 years later she is back standing tall and proud once again. She is a fighter! When she gets a little bigger she will once again be placed on the plant stand adorned with ribbons at Christmastime for now she is happy sitting near the TV watching the daily activity..Till we meet again..Mama Carol 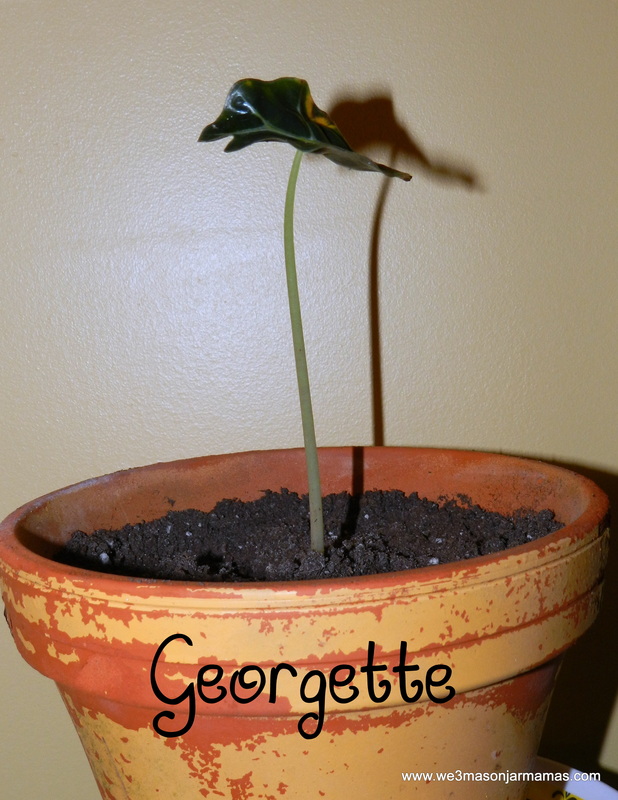